After enjoying the southern part of Sweden, my friend Moritz and I left the woods to meet up with a friend in Gothenburg. We preferred sleeping in the open countryside, so we left the city after a couple of hours headed northwest.

Stopping at the west coast

We ended up at the Tofta nature reserve close to the west coast, north of Gothenburg.

There were several skerries along the coast line which looked really nice.

The rocks looked even better when I went on a short hike at end of my work day while the sun was setting.

I didn’t meet any people while strolling around. Maybe that was the reason for the cows looking so interested? 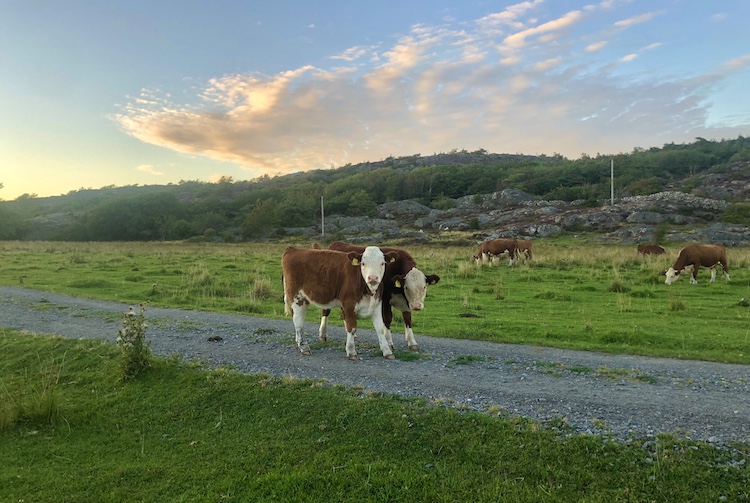 Back into the woods

After spending two nights at the west coast, we drove back into the inland headed north where we found a nice spot in the woods next to a river near Flötemarken.

After a refreshing bath in the river we warmed up at the campfire. 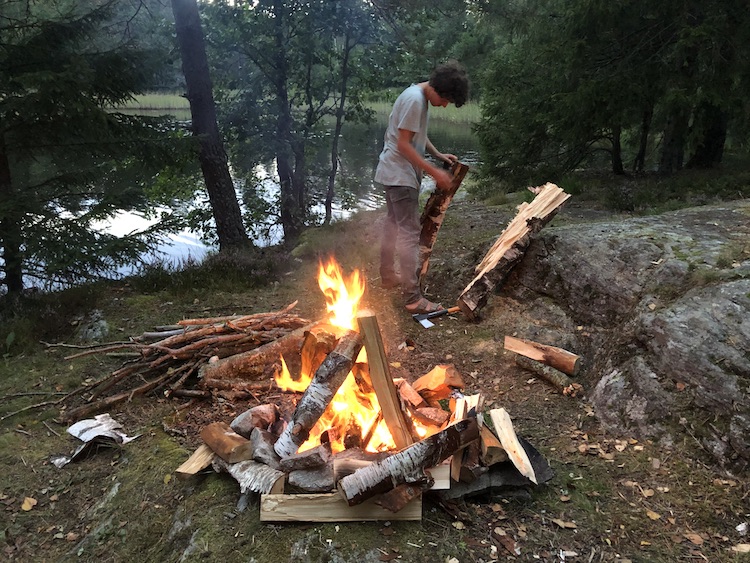 In southern Sweden, we mostly made campfires for pleasure or to grill fish that we caught. The further we drove toward the North, the more we needed a campfire to enjoy the cold evenings outside.

A weekend at Fulufjället national park

We weren’t in a hurry to reach the north, so we randomly picked places off the route. Moritz often scouted for nice spots while I was working and sent me the location, so I could follow him in the evening. I really enjoyed driving on lonely dirt tracks through the gigantic Swedish forests that seemed to never end. 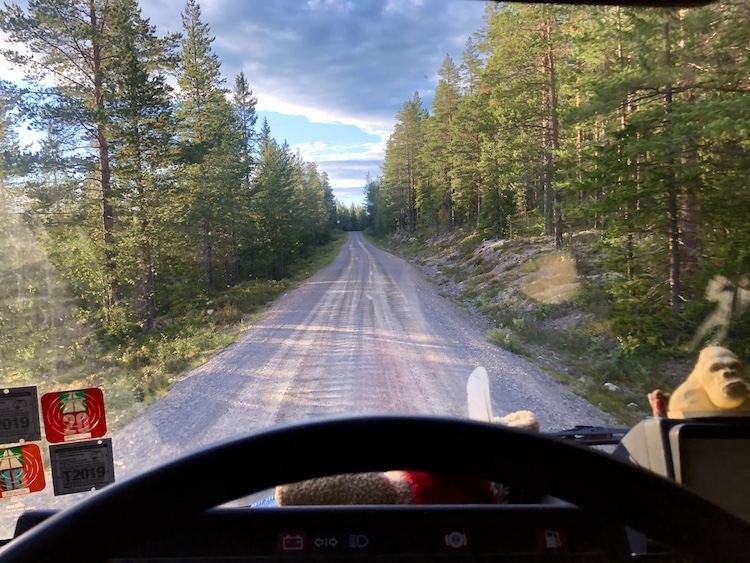 I probably spotted more reindeers than human beings out in the woods. 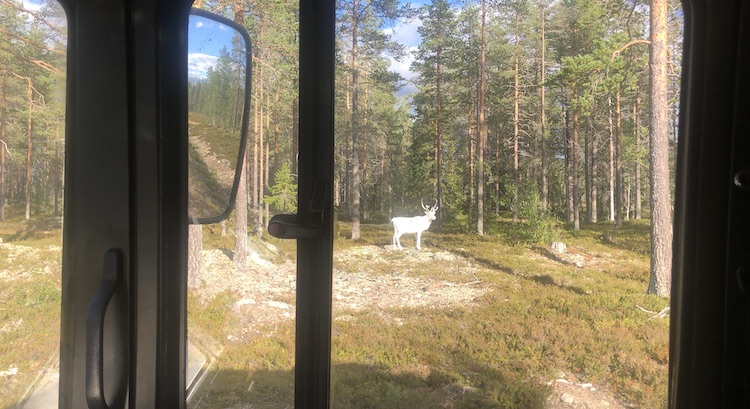 One of our excursions off the main road lead us to Fulufjället national park, close to the Norwegian border. We stayed in front of the national park close to a river.

The sky was mostly clear and the temperature abruptly dropped after the sunset. 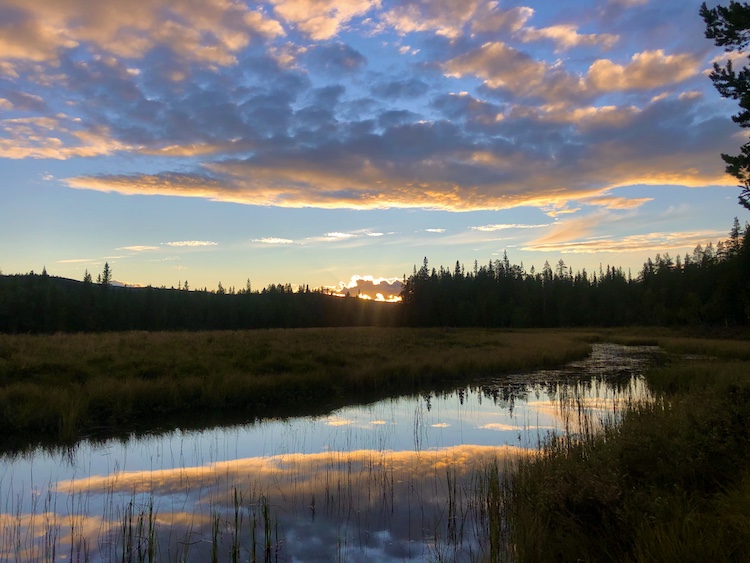 We were about 580 meters above sea level which had a noticeable impact on the temperature. We spent our first night with temperatures below 0 degrees Celsius.

When we woke up, it was rainy and cold, so I fired up the wood stove for the first time on this trip. 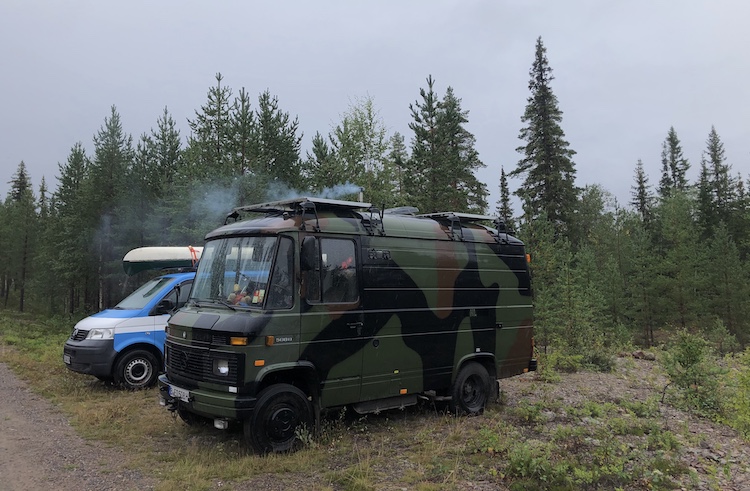 We had a cosy breakfast in my warm van while waiting for the rain to stop. 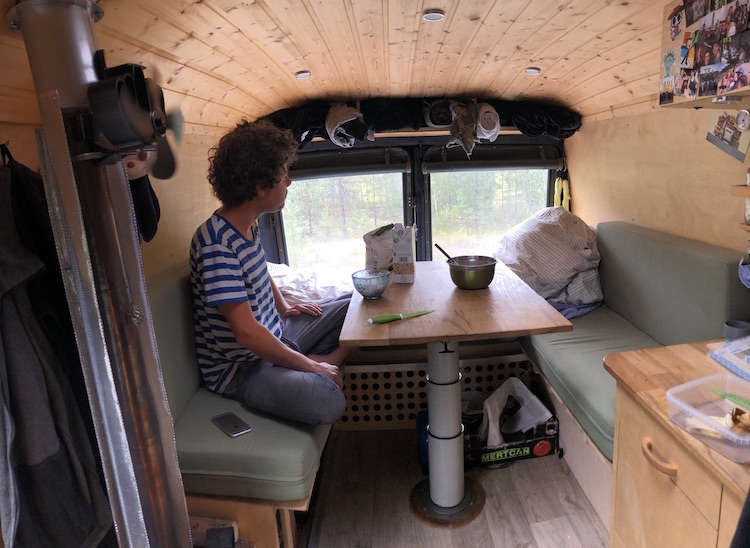 Once the rain stopped, we started climbing the Fulufjället massif. 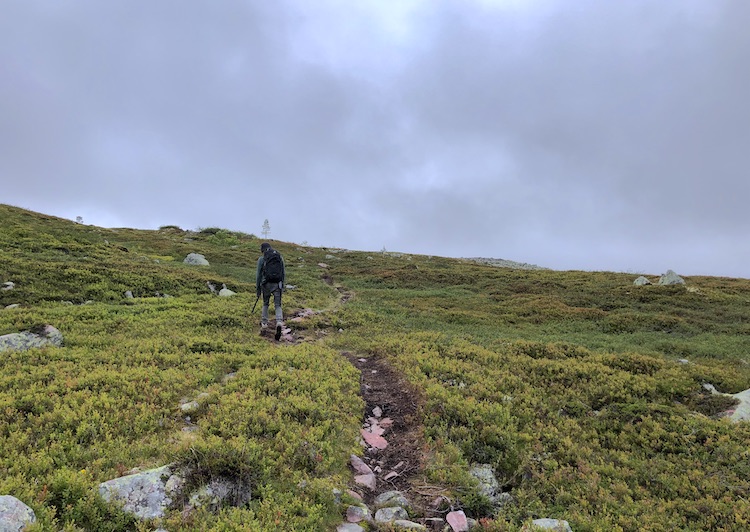 The weather was very fickle. We experienced wind, clouds, rain, sun and blue sky when we hiked across the gigantic plateau. 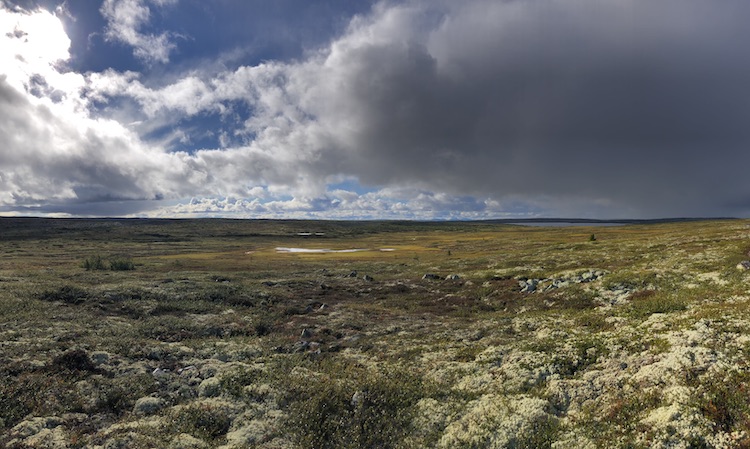 When descending the plateau, we spotted a little rainbow caused by the changeable weather.

The highlights of our hiking trip were the Njupeskärs waterfall, 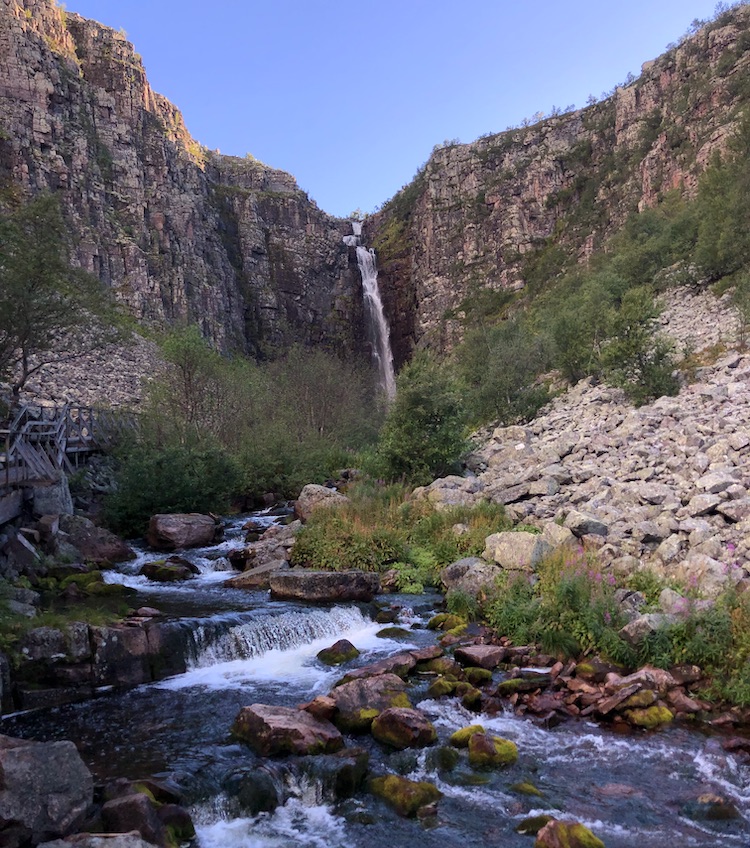 and some of the world’s oldest trees in the primeval forest of the Fulufjället national park.

What a great weekend! We really liked the area, so we stayed for one more day at a clearing right next to the river.

After the changeable weather on the weekend, we enjoyed several sunny weekdays. The nights became pretty cold. Our vans were often covered with ice when we woke up in the morning.

Luckily, the sun rose quite early and warmed up the air,

which eventually caused the ice on the vans to melt. 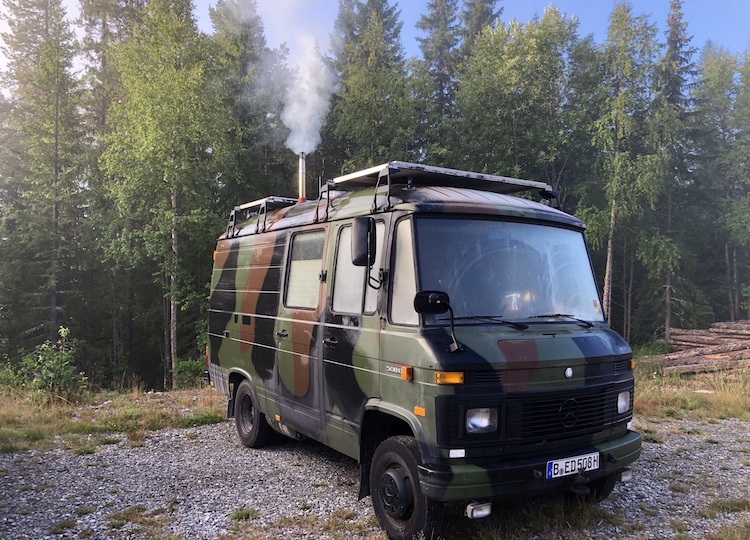 I really enjoyed my morning walks in the woods before starting my work.

We were still several hundred kilometers away from the Arctic Circle when we reached lake Storsjön in the middle of Sweden. The further we drove toward the North, the longer the twilight lasted. 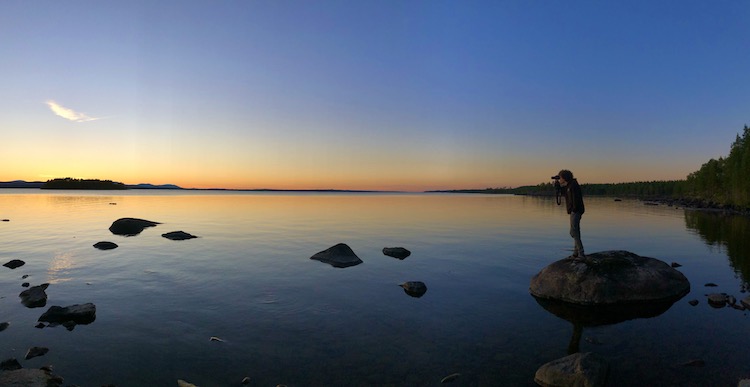 The sky seemed to remain endlessly bright and colorful after the sunset which made our evenings at the campfire really enjoyable. 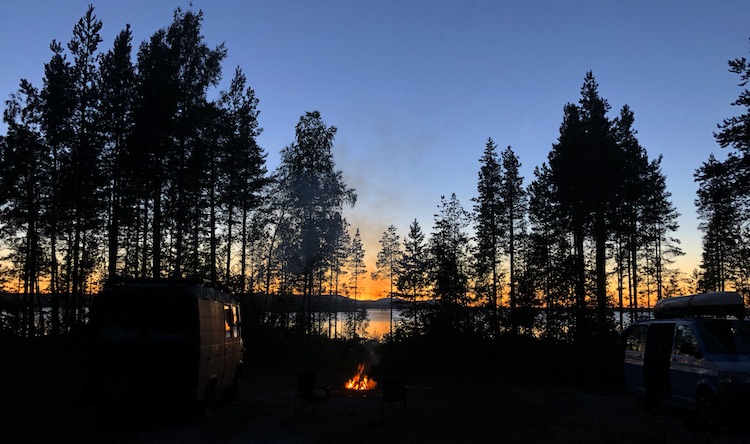 When we spent a night at a lake northwest of Ringvattnet the sky was completely clear.

We sat outside in front of the campfire as usual when we suddenly spotted some green silhouettes far away in the north. Were we observing the northern lights? We were still far away from the polar circle. The lights were really weak and disappeared quickly. Only a few seconds later, the lights appeared again and were a little more intense. I tried to capture the scenery with my iPhone which was definitely not the best equipment for shooting pictures at night: 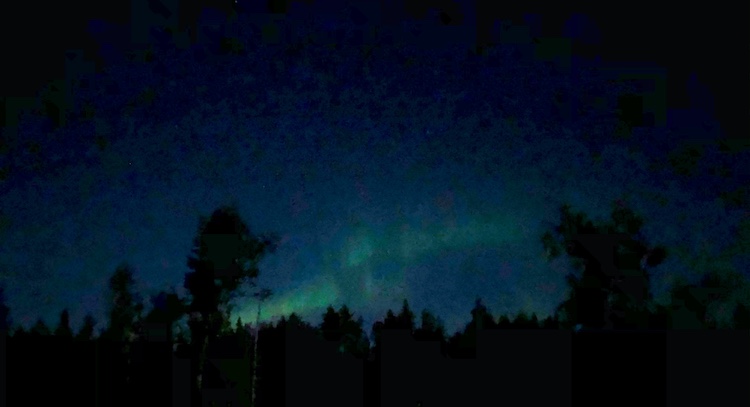 Wow, we were actually seeing the polar lights the first time in our lives. So exciting!

Defining a concrete destination in the North

Influenced by our spectacular observation, we started researching more about the northern lights. We wanted to see more of it! Abisko was supposed to be one of the best spots in northern Sweden to observe the northern lights. The live pictures of the webcams accessible through the Lights over Lapland website inspired us to drive all the way to Abisko which is roughly 250km within the Arctic Circle. 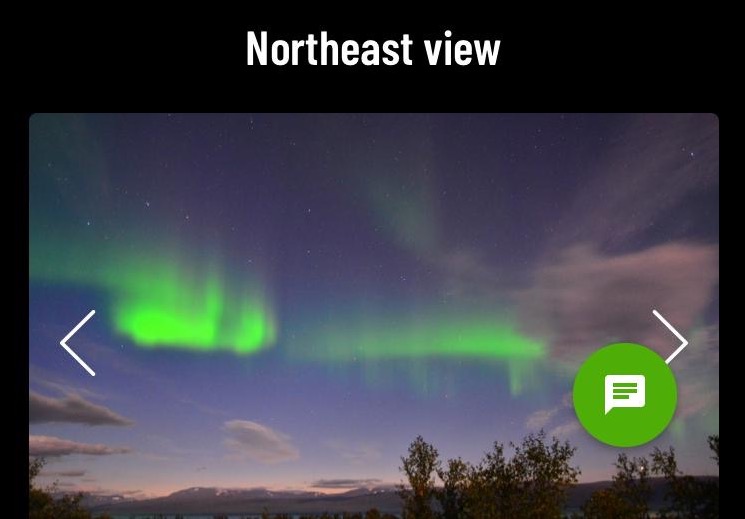 We finally had a concrete destination for our trip to the North. Motivated and unafraid of the cold and rainy weather in the North, we decided to drive to Abisko which was still more than 800km and multiple stages ahead of us.