It didn’t take a lot of time to escape from the bad weather in Abisko. Most clouds were gone and the sun was shining after driving 170km southeast. 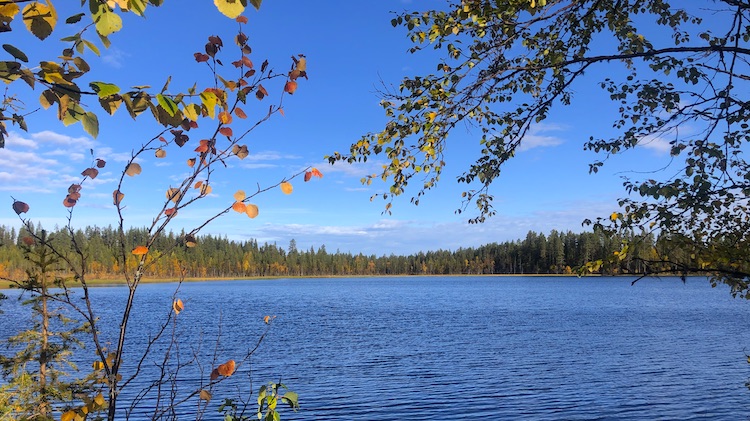 Lake Marsijärvi seemed like a nice place for soaking up some sun and fishing. We caught another pike and prepared it with a lot of garlic, lemon, herbs, olive oil and roast potatoes. Delicious! 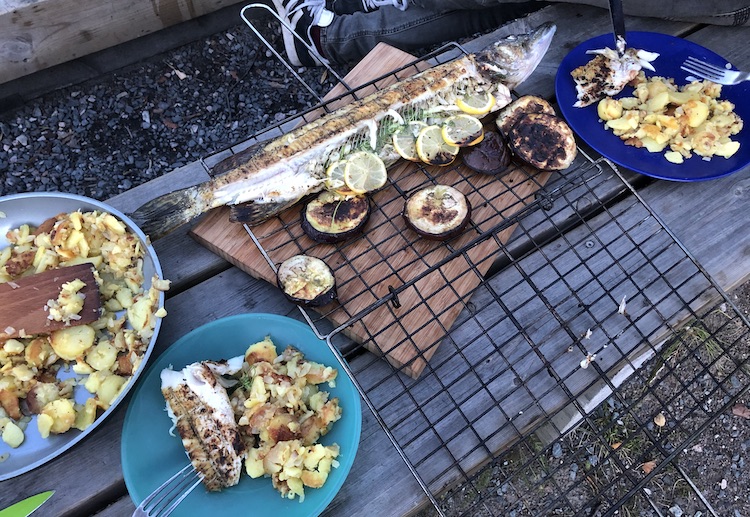 The area was really nice and peaceful, especially during the sunset.

Only about 80km further south of lake Marsijärvi, we found another great spot in the forest near Satter.

Our camp was located right next to a river where Moritz went fishing to no avail.

No fish for us, so we enjoyed some pancakes prepared on my wood stove. 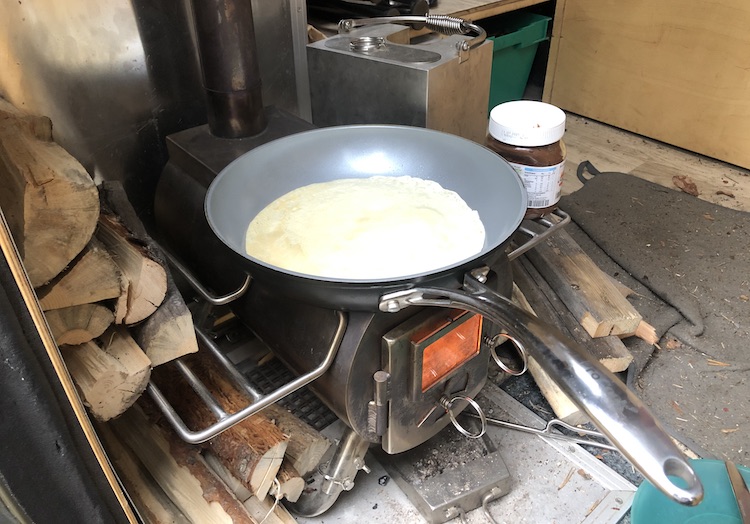 Reaching the Gulf of Bothnia

After driving about 450km in four days, we reached the northern part of the Gulf of Bothnia close to the Finish border. The weather was really nice. We spent cold nights under the star-spattered sky and were grateful for the rising sun warming up our vans in the morning.

Not only us, but also insects like this butterfly seemed to enjoy the warm sunshine. 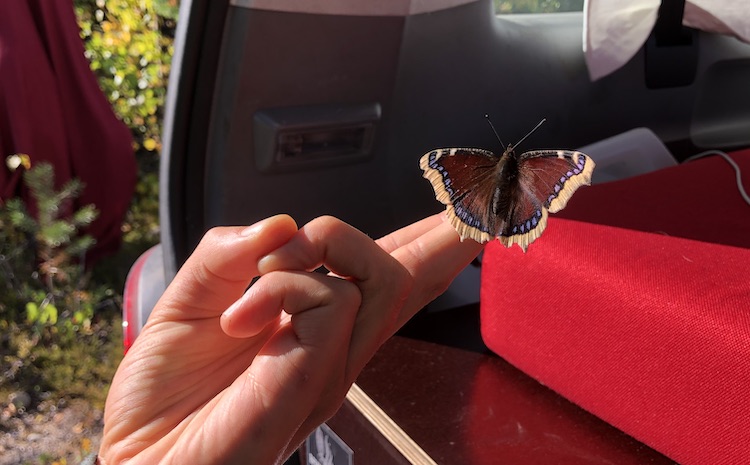 Getting stuck in the sands

We could tell that autumn was coming. The hours of daylight decreased noticeably every day. Most of the time, the sun was setting when I started driving after work. 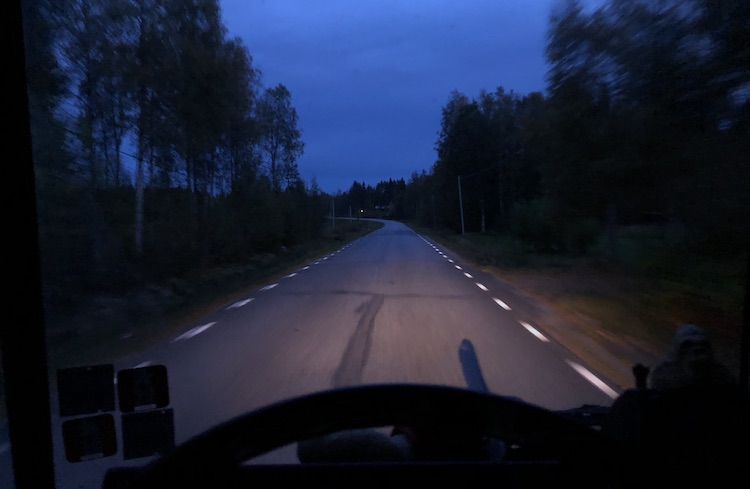 Usually it was completely dark when I arrived at the spots where Moritz waited for me.

One night, Moritz waited for me in front of the beach near Åbyn. It was quite dark when I arrived. I spotted Moritz’s van but took the wrong path. Before I realized that I was following the tracks of an off-road vehicle and not of Moritz’s van, I got stuck in the middle of the sands. Oops. My first attempt shoveling some of the sand away, putting logs into the sand and backing up failed. The diff-box and the footstep in the back of my van hit the ground. It seemed like I had to put a little more effort into recovering my van. 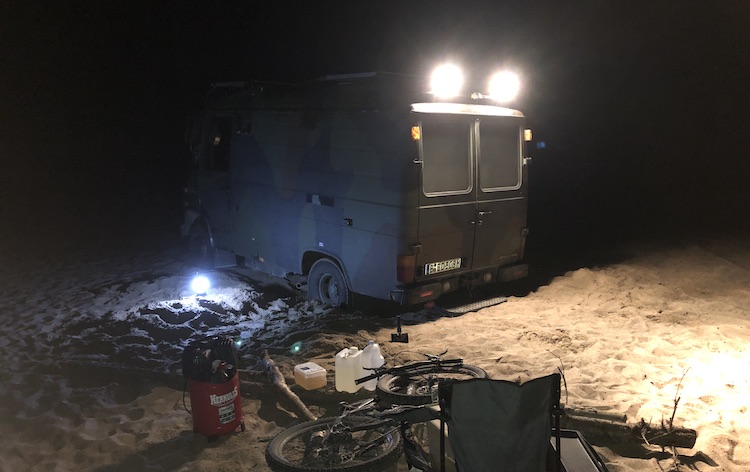 I removed all the load from the van, released pressure from the tires to increase the contact surface and started shoveling for real. 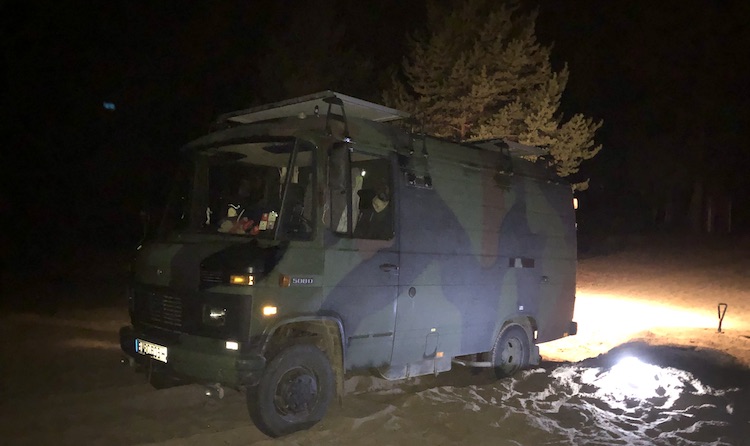 While enjoying a free workout at the beach shoveling sand, I thought about the gigantic digger that we played with the other day. 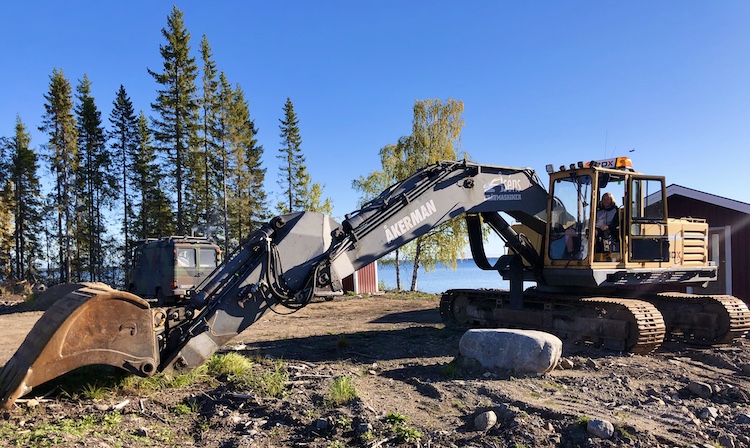 The digger was far away in the North, so I had to settle for my little folding shovel.

I dug a 3 by 6 meters ramp into the sand behind my van in about two hours. 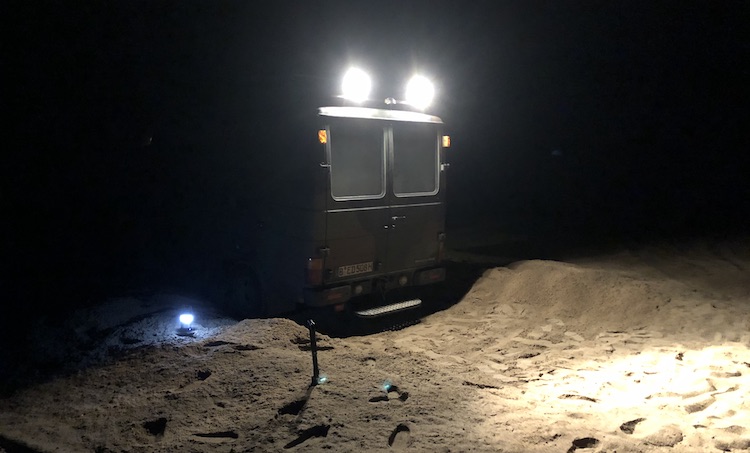 My second attempt worked out well and my van was back on solid ground around midnight.

Spending 24 hours in the rain

I was quite happy that I didn’t wait for the next day to recover my van. After my adventure in the sands, the weather changed and it started raining a lot. 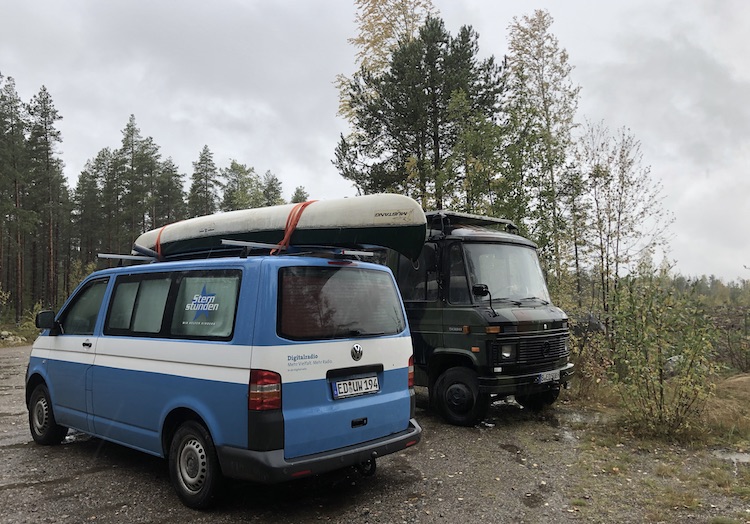 The rain didn’t stop at all, so I spent a whole day inside my warm van for the first time in Sweden. 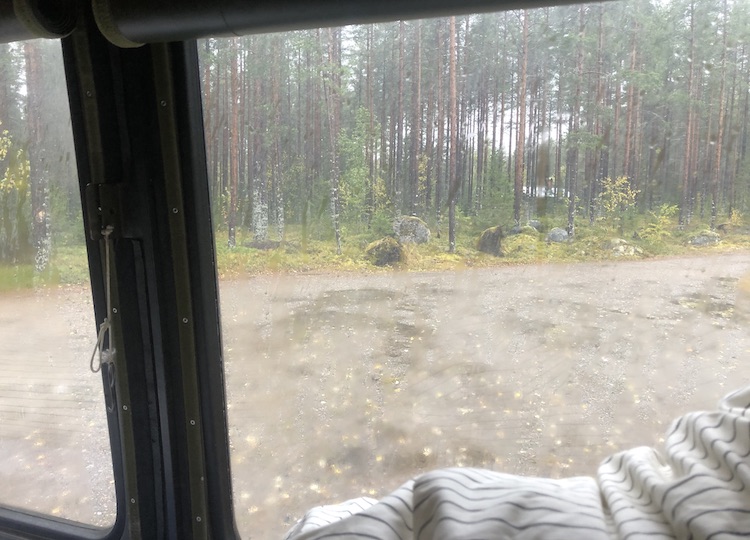 Luckily, the rain only lasted for one day and one night. The weather was much better when we stayed further south near lake Storträsket. 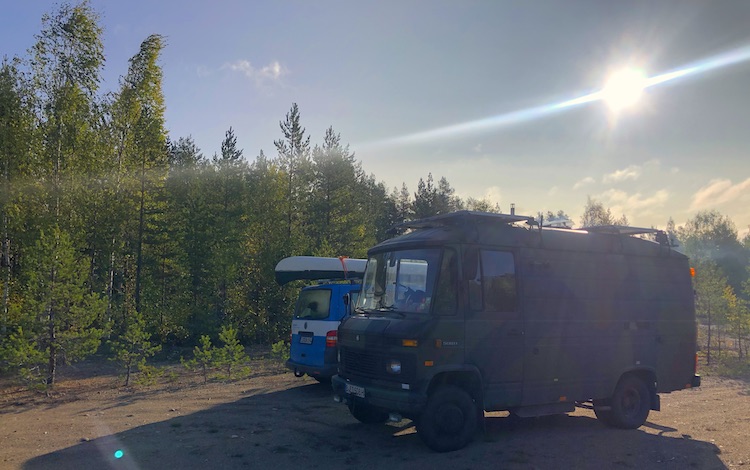 The coast of the Gulf of Bothnia seemed much more populated than the woods in western Sweden. We also passed a few industrial areas on our way down south along highway E4. We were still able to find suitable spots to stay, but it seemed harder than before, so we decided to drive a little more into the inland. There were plenty of lakes like Mjösjön that offered great places to stay. 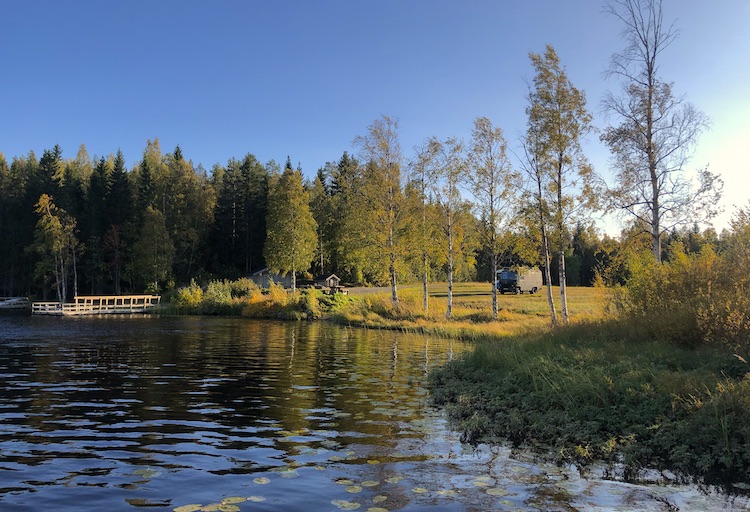 Although it was sunny at Mjösjön, the strong wind made it really hard to enjoy the time outside. That’s when we decided to drive to Gvorrsjön to see if we could build a little shack just for fun. We collected a couple of dead logs lying in the forest. 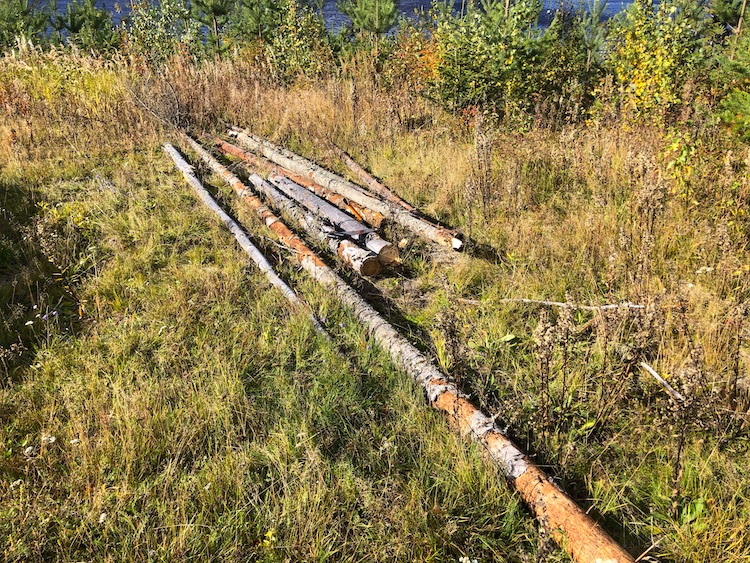 With the help of two handsaws and an axe, we started preparing the logs. We cut notches into the ends of each log that would allow us to stack them on top of each other. 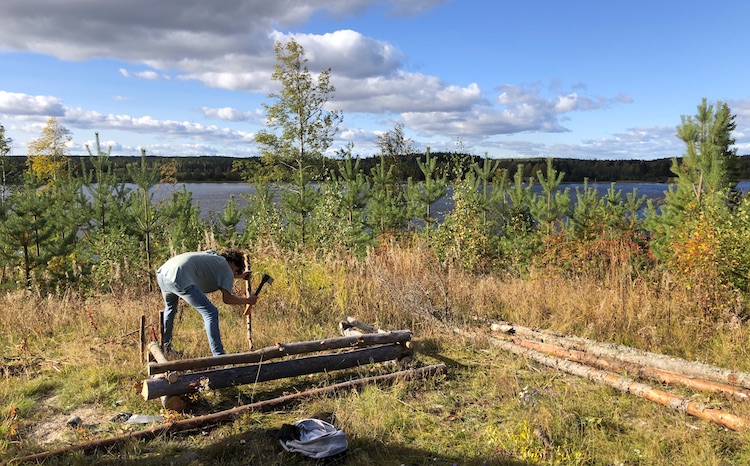 We spend the whole afternoon working on the logs and enjoyed observing the progress. 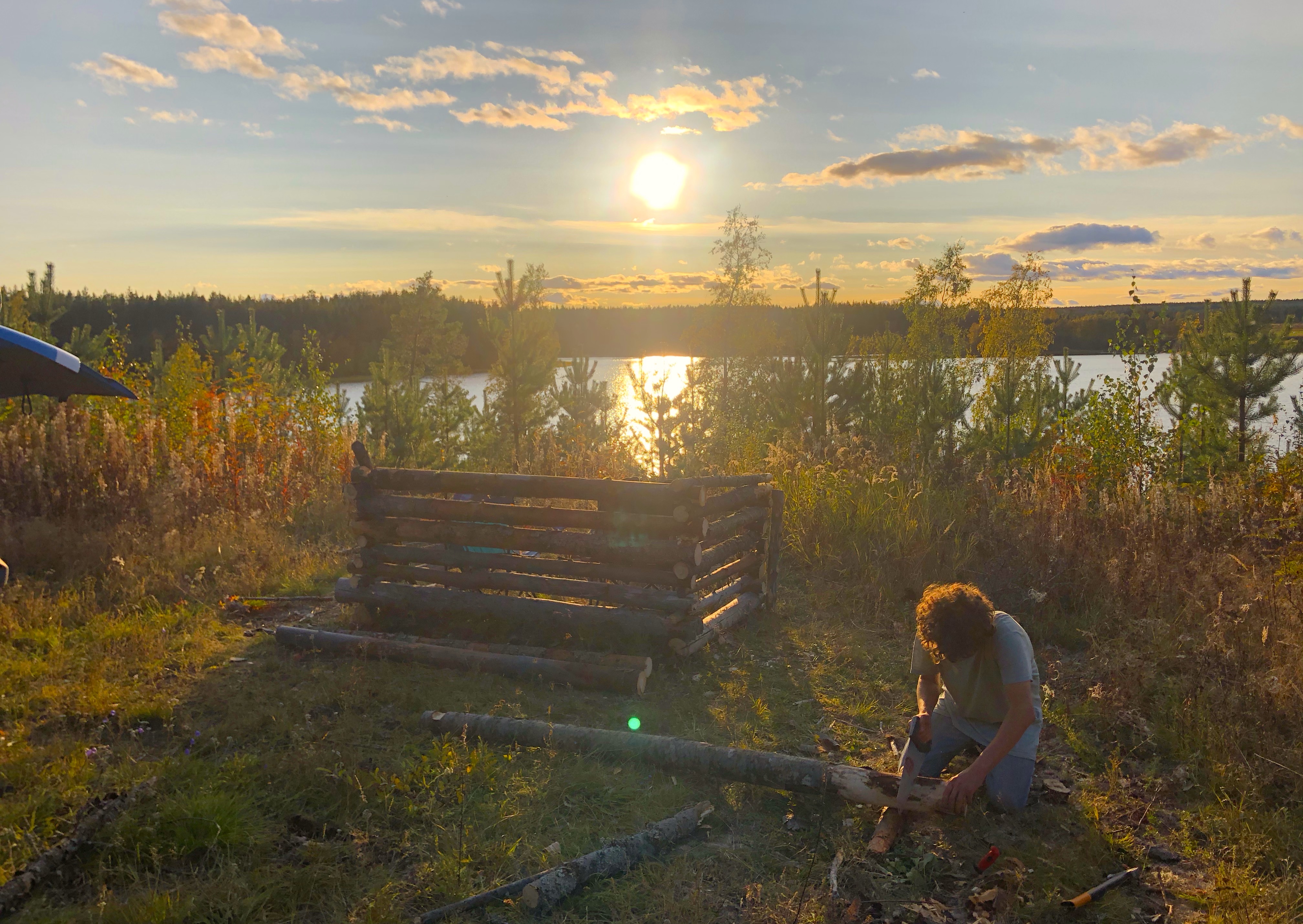 We also collected a bunch of stones to build a proper fire pit. 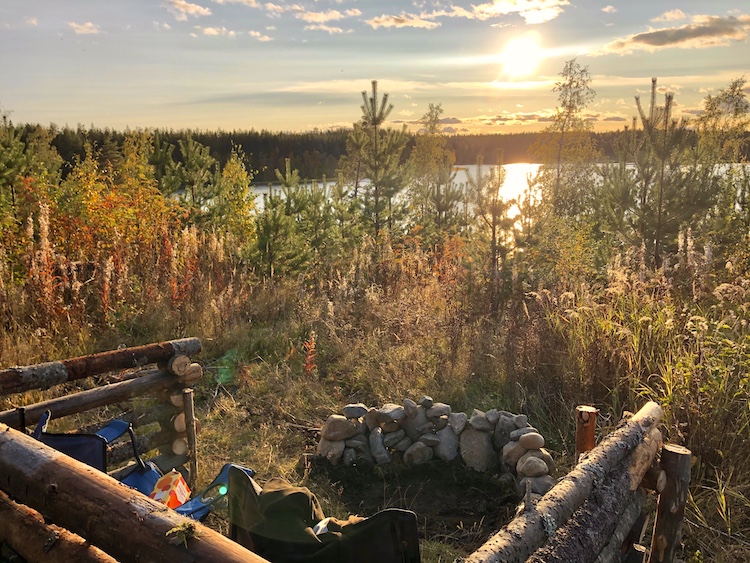 By sunset, the basic construction of our little shack was done. 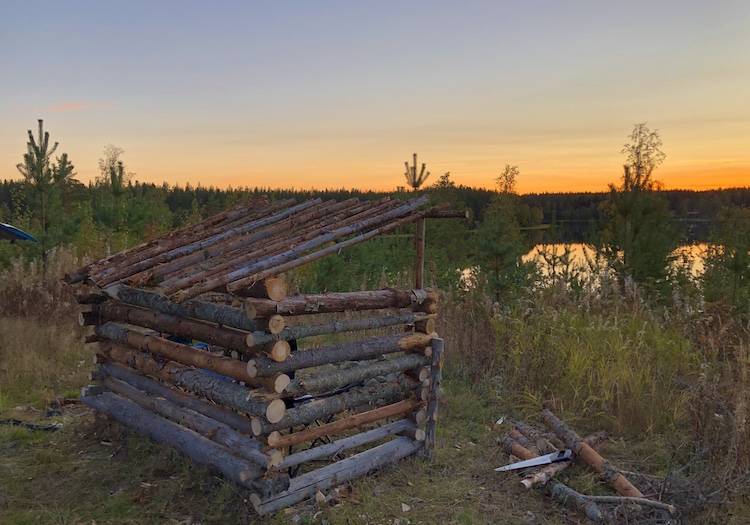 The construction seemed surprisingly stable although we didn’t use any nails or screws. We covered the roof with a tarp for better insulation and lit up the fire for dinner. 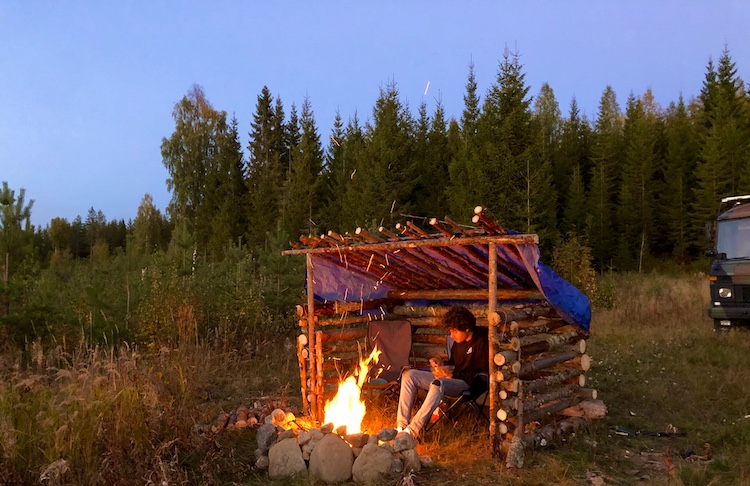 When the temperature dropped at night we also covered the back with a blanket which had a positive effect on the temperature and humidity inside the shack. We spent a nice night in our little shelter without freezing. 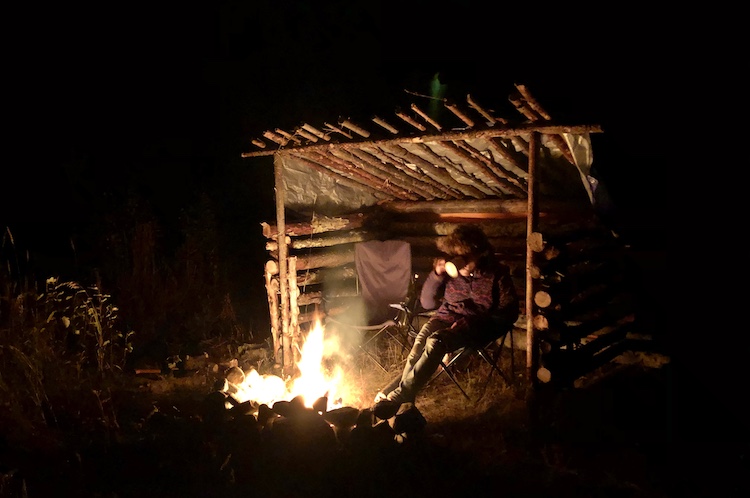 We were allowed to build the shack, but the owner of the property asked us to remove it before leaving. The construction was really easy to disassemble. After a few minutes the area looked pretty much the same as it looked before. 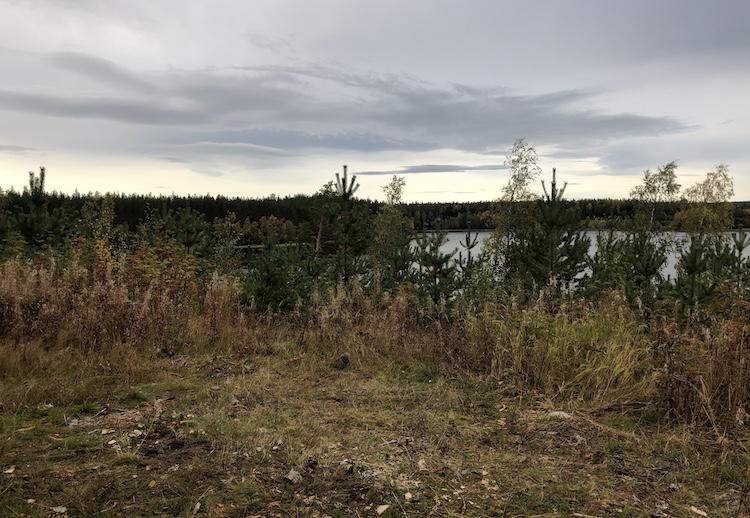 What a fun project!