I was so excited having bought a Mercedes 1113. As I didn’t have a truck driver’s license to drive the truck legally on German roads, I only went on short cruises around the corner. Driving this old beast seemed like actual work but was so much fun. I loved it!

Although I was planning to turn the truck into a gigantic construction site, I wanted to sleep in there as soon as possible to get a feeling for it. The first thing I did, was building a provisional bed and buying a new comfortable mattress. 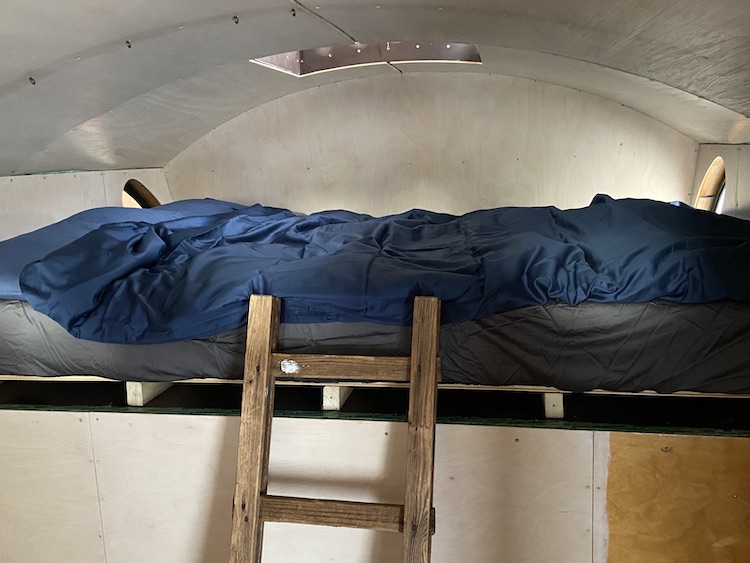 My first night in the truck was very pleasant. I slept like a baby and felt great in the morning. I didn’t mind the chaos in the truck at all. 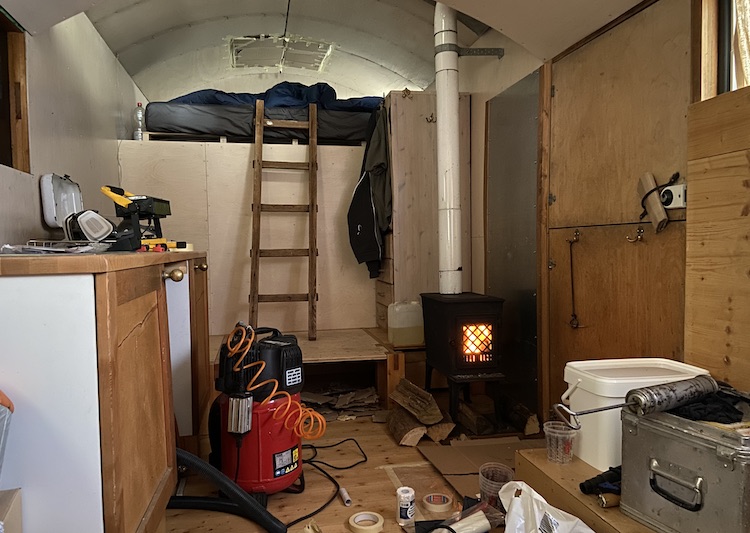 I felt comfortable in my new “workshop apartment”.

Distracted by all the excitement, I totally forgot about the fact that the truck was almost one meter higher than my van. It didn’t fit into any garage or barn at the farm of my friends in Bavaria. Winter was about to come and it rained a lot. I wanted to give the wooden cabin a new paint job before tackling the interior, so I had to find a place that was protected from the weather where I could work on the truck.

I got in touch with a bunch of people to find a suitable place with no avail: The locations were either too small, too expensive or badly located. As I didn’t want to lose more time, I started improvising and built some sort of a tent in front of the barn. 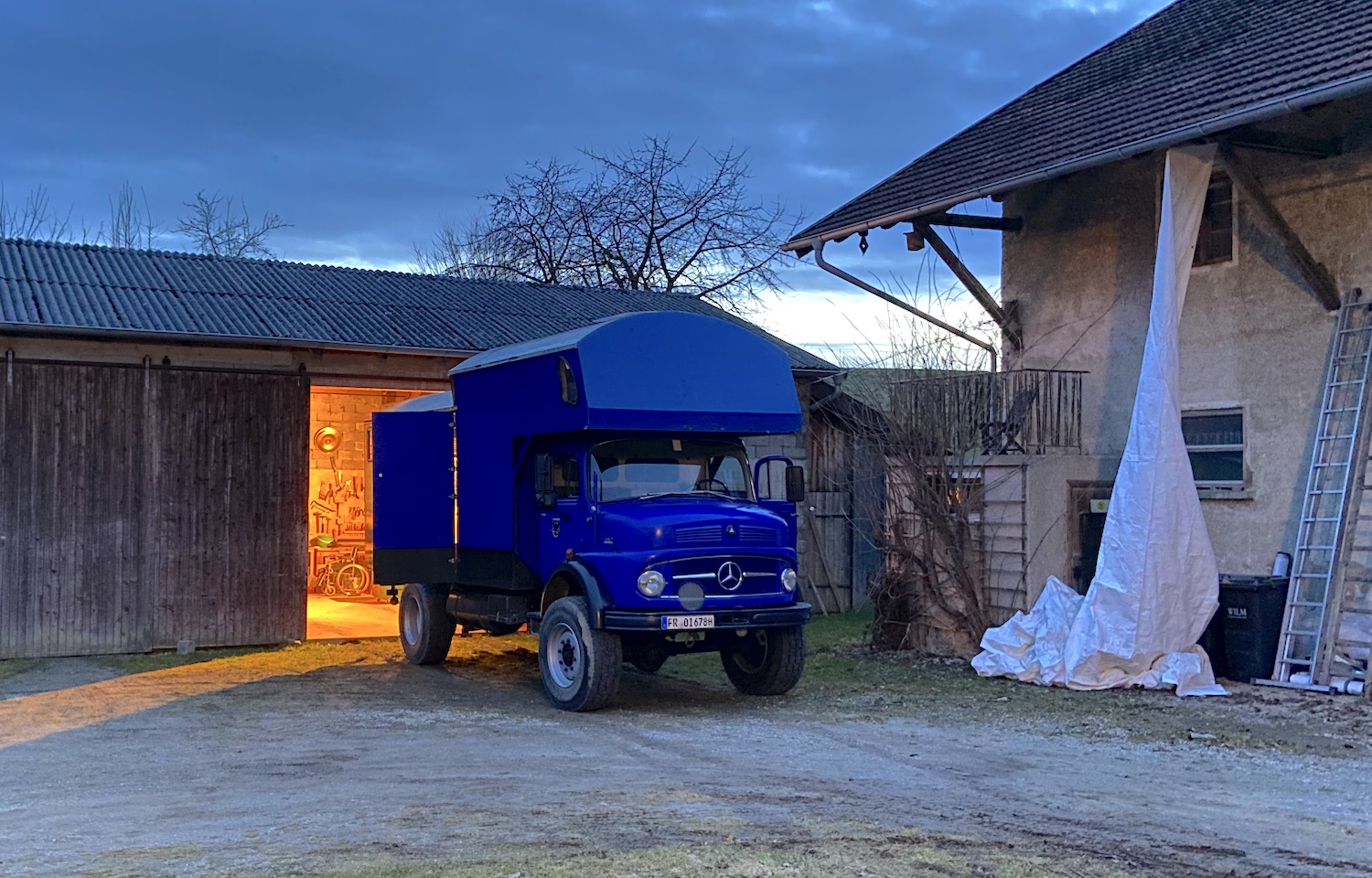 The roof of the barn was high enough, so I installed a gigantic plastic tarp that would protect the truck from the rain and the expected snow. 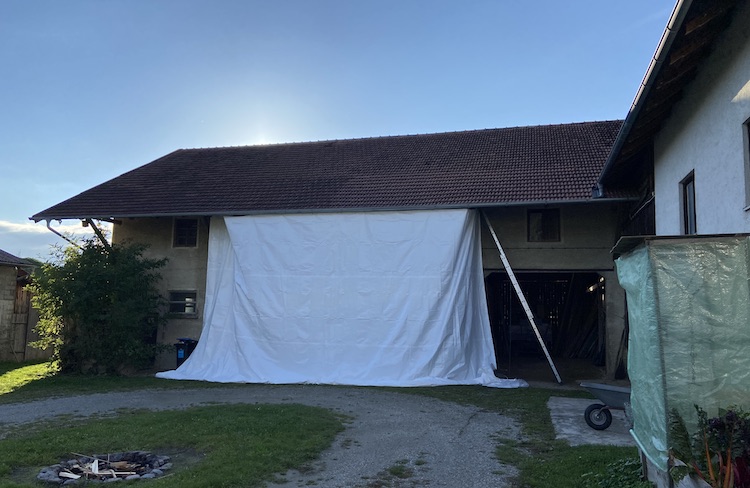 I finally had a place to work on the truck without having to worry about rain and snow. 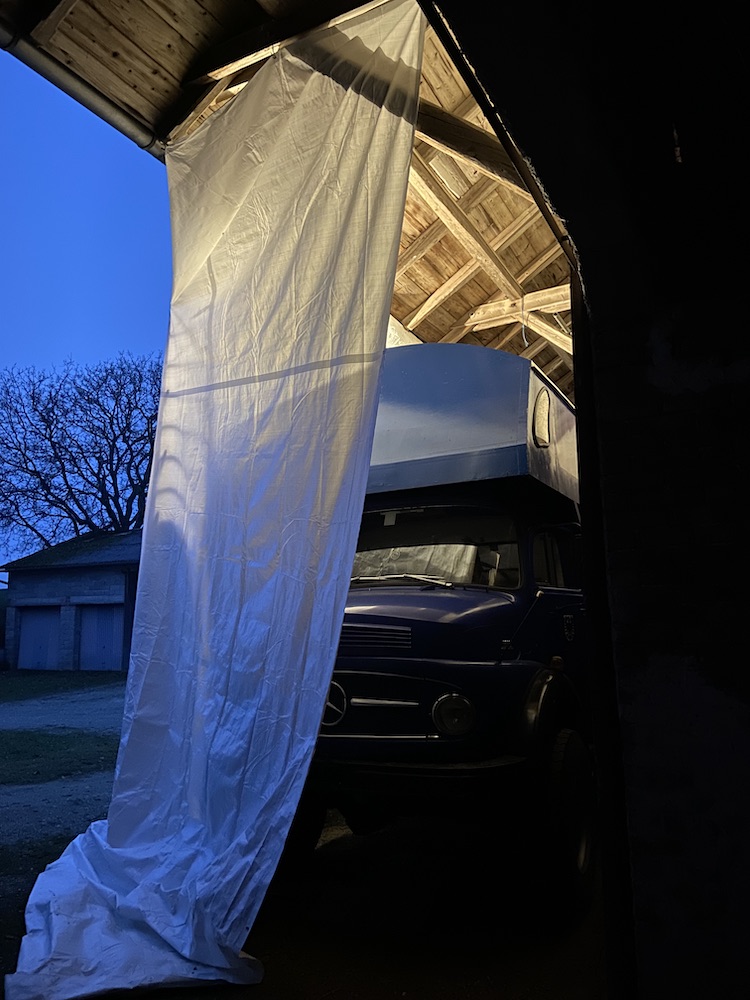 Getting a truck driver’s license

Being able to drive the truck legally was my highest priority. Last-minute, I managed to book a full-time courses in November at a driving school in Freising, where I could obtain a truck driver’s licenses within three weeks.

The nights were pretty cold already, so I loaded as much wood as possible into the van before leaving the farm. 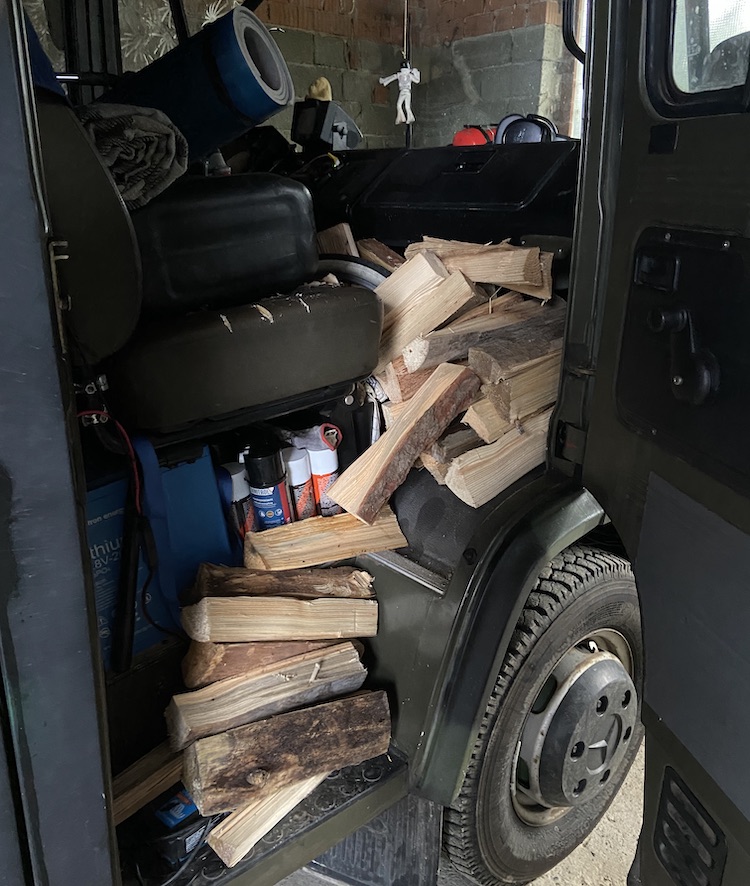 With the help of my wood-stove I could comfortable spent the cold nights at the parking lot in front of the driving school. 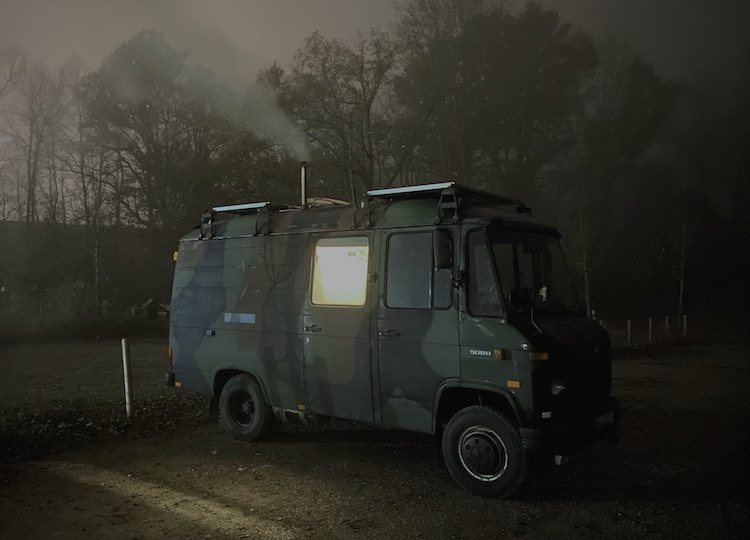 During the day I either attended theory lessons or drove a brand new Mercedes-Benz Actros 2545 through the area of Freising. 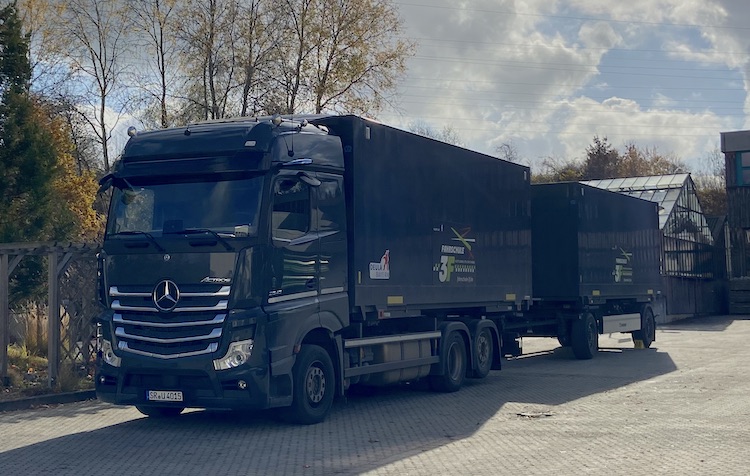 “Driving” one of the latest Actros models was so much different compared to driving my 1113 from the 60s. While the 1113 required a lot of physical interaction, the Actros 2545 could basically drive on its own. You just had to keep your fingers on the steering wheel while the lane keeping system would move it for you. Wow, I could really tell that things had changed within the last 60 years: From analogue dashboards and a few mechanical switches, 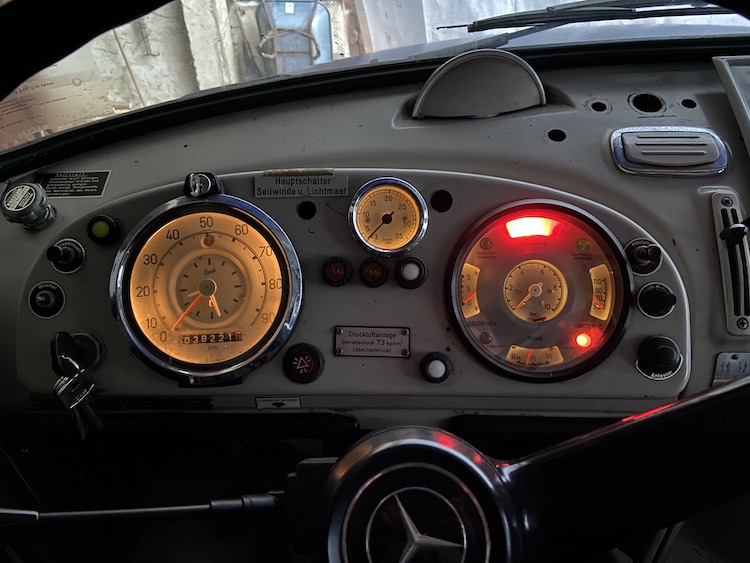 to touch-screens and micro-chips that probably contained more software than I’ve ever written in my career as a software engineer. 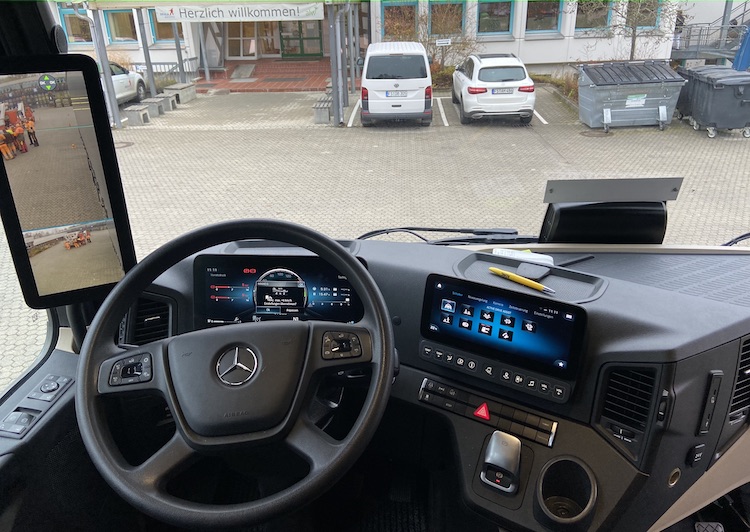 The Mercedes star logo in the center of the steering wheel seemed like the only thing that had survived for all these years.

After three intensive weeks at the driving school, I successfully passed all the exams and was finally able to legally drive my truck! 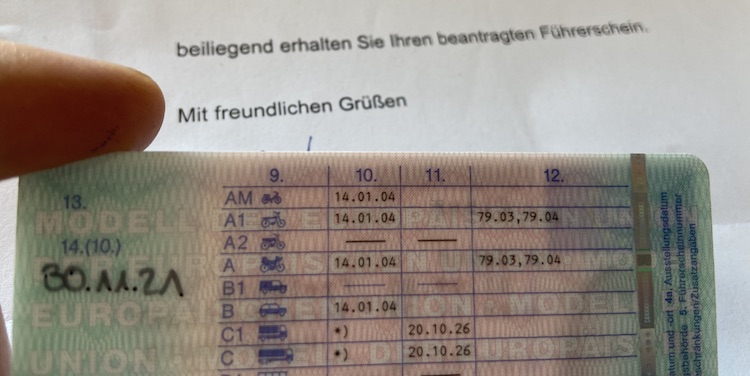 Inspecting the truck in detail

After all arrangements were made I was finally able to start the actual work on the truck. Together with my technical assistant, I started inspecting the cabin in more detail. 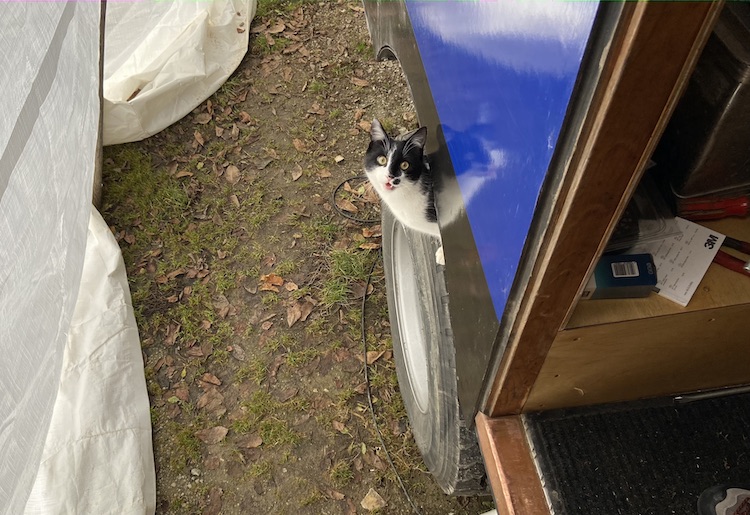 When taking a closer look at the roof, I realized that a simple paint job might not be sufficient. 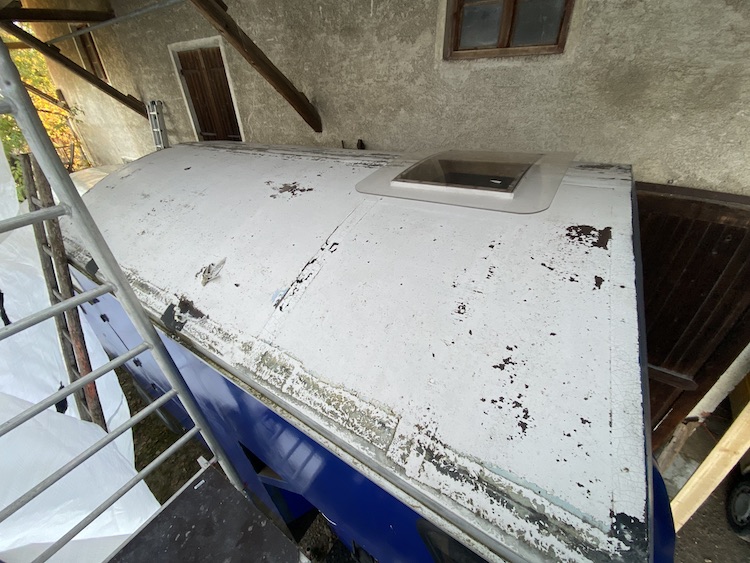 The more I scratched and the harder I pulled, some things just fell apart. 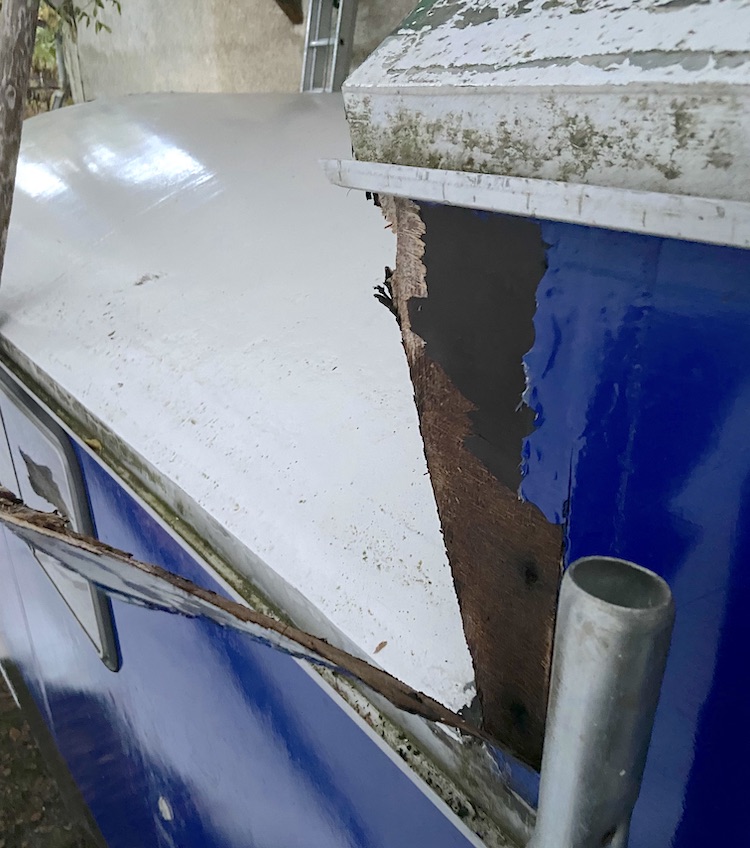 What had looked intact turned out to be broken after removing all the paint and glue. 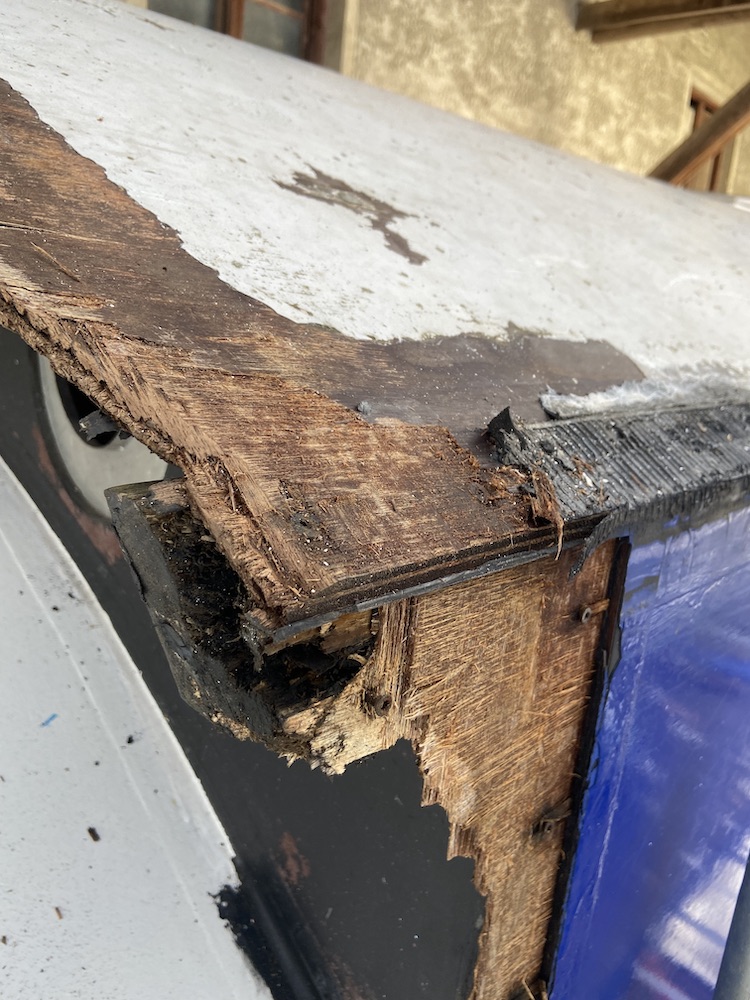 I also found a few damaged areas in the front that were hard to detect without physically removing the paint and breaking pieces apart. 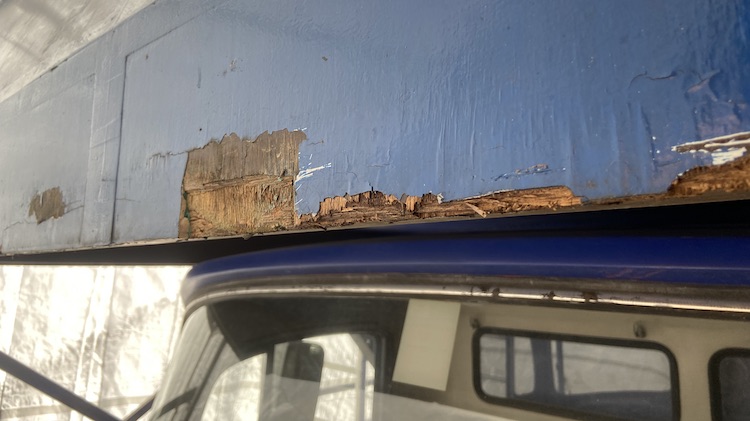 My plan of applying a “simple” paint job vanished into thin air. There was definitely more to do. I wasn’t afraid of all the work. I was rather disappointed that I paid for something that I expected to be in a better condition. Luckily, the seller was really friendly and proposed to retrospectively change the deal which made me really happy. He also connected me with his friend who had originally built the cabin, so I could ask him about the details of the construction.

Feeling motivated to renovate the truck, I also started to take the inner cabin apart. 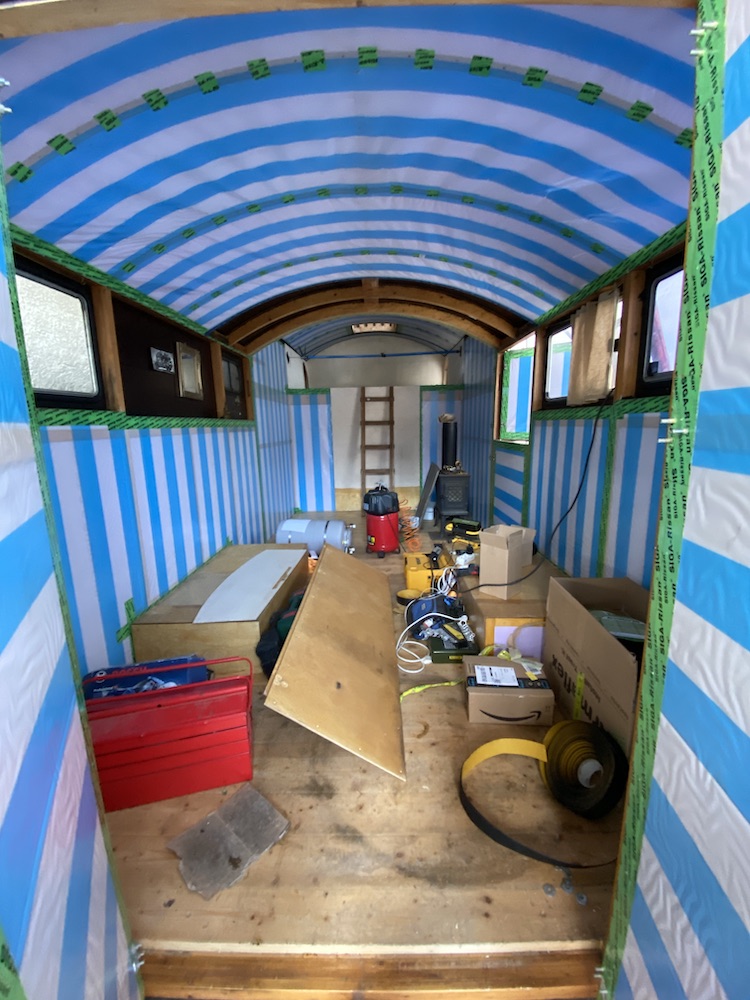 I removed all the furniture and the wall cladding to get a better idea of the full state of the truck. 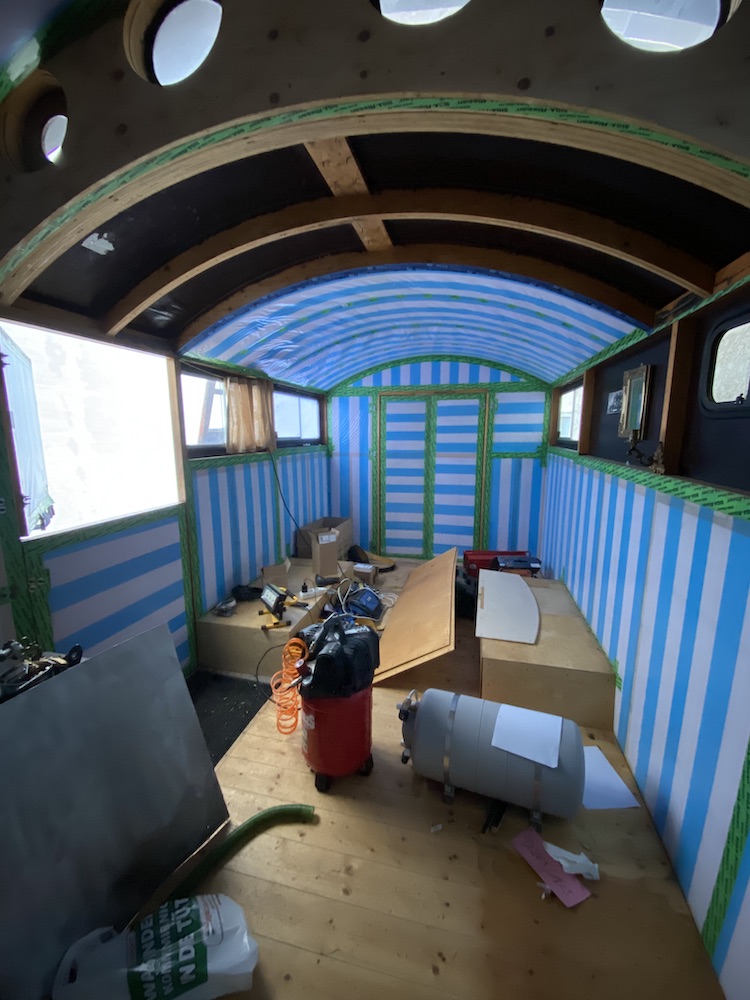 There was a lot of stuff to fix. I was on the fence whether I wanted to remove the entire cabin from the truck to build a new one from scratch or repair the existing one. At the end, I decided to repair the cabin because of two main arguments:

I wanted to start working on the truck immediately. Challenge accepted!