After climbing Pico del Teide in the beginning of March, COVID-19 slowly started spreading on the European mainland. Public life outside of Italy seemed mostly unaffected. Marco and I had a ticket for the same ferry leaving Lanzarote on March 15th at 1am. We met up at Playa Famara to spend our last days on the Canaries together.

After spending a couple of relaxed surf and work days, the WHO officially declared the coronavirus a pandemic and the situation became more serious on the European mainland. A few days later, only a few hours before the departure of our ferry, the Spanish government declared the state of alarm forcing everyone to stay at home for 15 days. People were only allowed to leave their homes for doing groceries, visiting a doctor, going to work or walking their dog.

Preparing for the lockdown

The situation seemed quite chaotic. Different news platforms spread different information and the local authorities also didn’t have clear instructions, yet. Things changed every minute. The situation on the Spanish mainland seemed even more confusing, so Marco and I decided to stay on Lanzarote until things would calm down a little bit.

We stocked up our supplies, filled our water tanks and drove to a remote spot north of Famara. 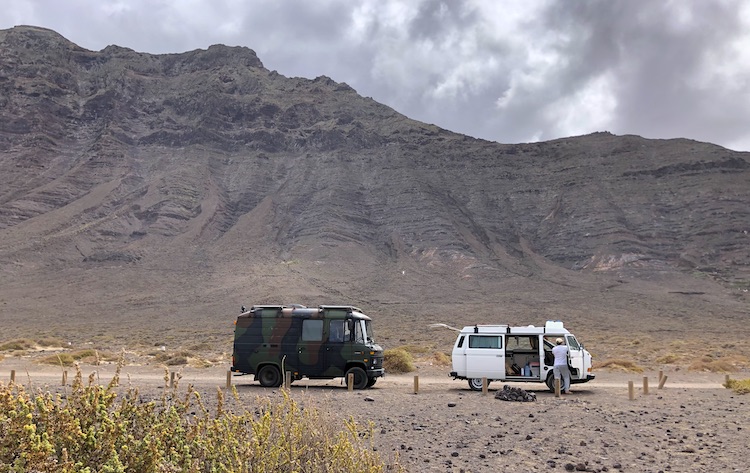 The spot seemed great to spend the next 15 days in complete isolation.

Moving to a public parking lot

Soon after settling in front of the beach, the local life guards told us to leave. The police was about to lock down all beach areas around the island. Even after a phone call with the police, it seemed unclear where we were allowed to stay with our vans. Different people provided different information. Parking our vans in a public parking lot in Famara seemed like the most accepted option. 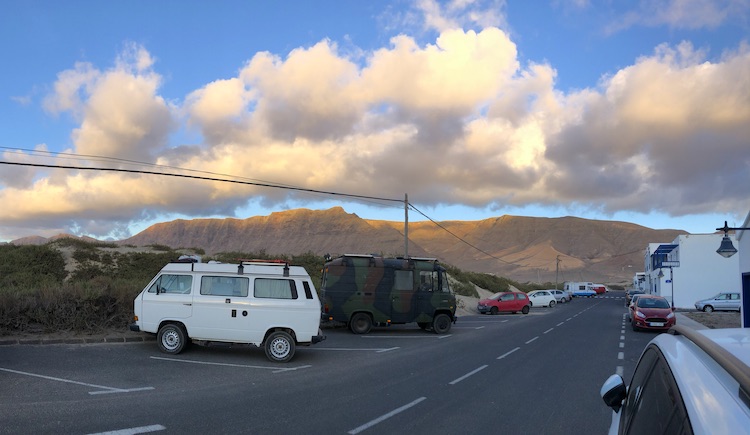 Getting used to the new situation

The police and the army patrolled several times a day. As reported in the news, they strictly enforced the rule of staying at home. At the beginning, the situation was quite stressful. We weren’t quite sure whether we’d be tolerated staying in the same parking lot for several days. Peeing in the dunes wasn’t one of the activities officially allowed by the government, so each time we left our vans we made sure there was no police or army around.

We played by the rules. We’d occasionally walk to the supermarket. Other than that, we spent most of the time (probably 23,5 hours a day) in our vans. We experienced sunny days, 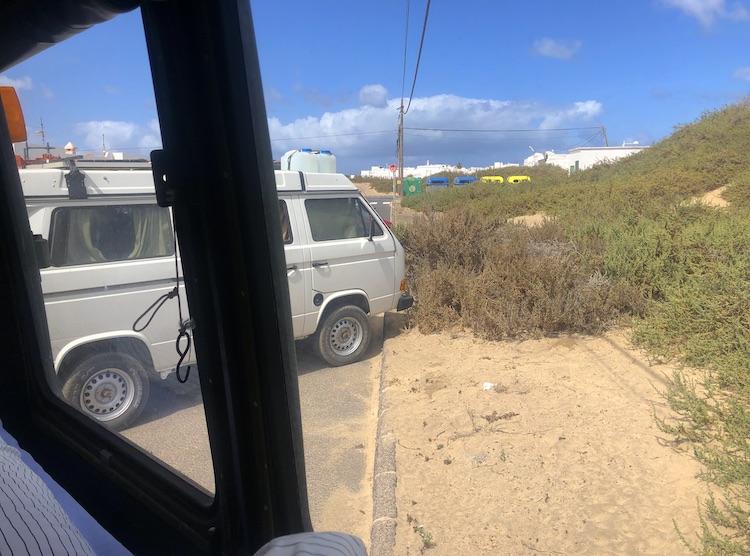 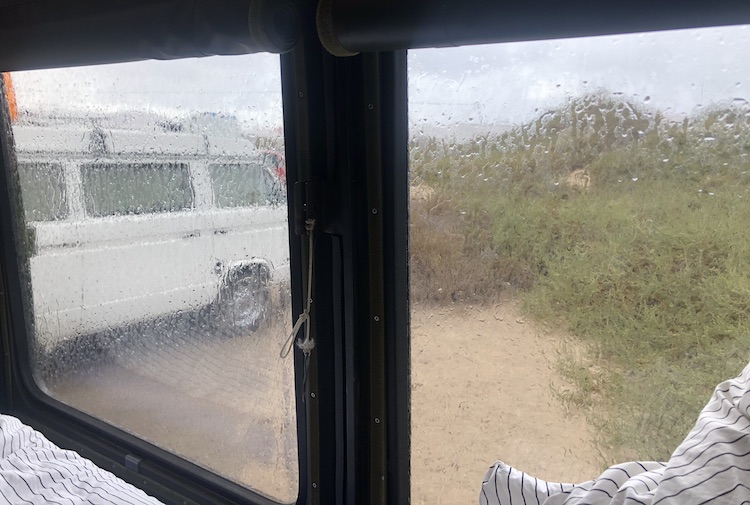 and sunsets without moving. 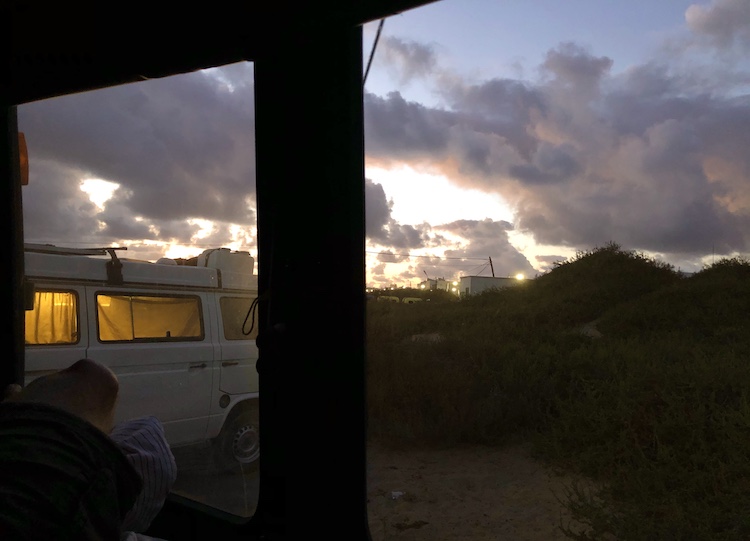 After a couple of days we (and probably also the police) got used to the new situation. Things became more relaxed and we realized that there might be worse places to sit out the coronavirus crisis.

In fact, my weekdays didn’t change tremendously. I was still able to work in my van as I did before the lockdown. Nevertheless, I seemed less productive while the news were flooded by corona stories. I was also worried about my family in Germany who were more exposed to the virus than I was. Happy, worried, relaxed, worried, my emotions were changing frequently. Over time, I also got emotionally used to the “new normal”.

The lockdowns happening all over the world also had some positive side-effects: Life became more remote. I wasn’t just video chatting with my colleagues at work but also spent more time video chatting with my family and friends. I even attended a DJ streaming party hosted by a punk bar in Berlin where I virtually met several friends from Berlin I haven’t seen in awhile. 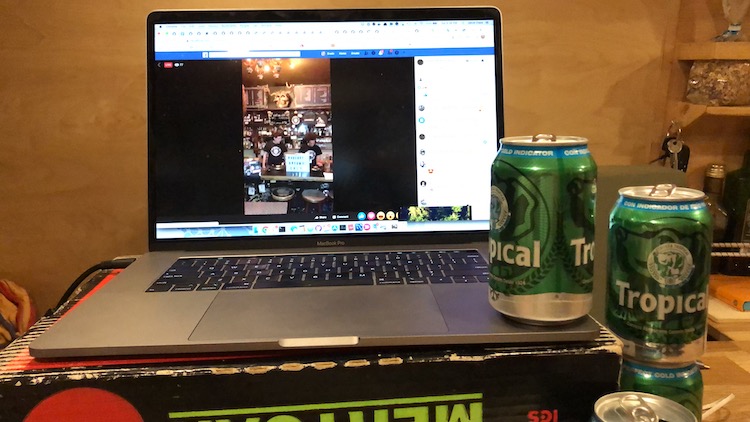 Preparing to leave the Canary Islands

After finally getting used to the new situation, things changed again when the Spanish government released another decree enforcing even stricter rules: All hotels, apartments and other accommodations for tourists like campsites or van parking lots were supposed to be closed within a week. The message was fairly clear: all non-residents were supposed to leave the Spanish country (including the Canaries). Bummer! We didn’t seem able to sit out the coronavirus at Famara and were forced to leave Spain.

Luckily, we were able to change our ferry tickets to the next possible departure on March 29th. So, we’ll be spending five more days in our vans at Famara before taking the ferry to the Spanish mainland. Then Marco and I will part ways. He will return to his apartment in Denmark and I will drive to Germany where I’m officially registered. I’m not really looking forward to the trip through Spain and France to Germany.